On July 18 this year a train loaded with flour was sent from Kostanay station on the route through Kazakhstan and Turkmenistan to Afghanistan.

The length of the route Kostanay – Bolashak – Serhetabad (Turkmenistan) is more than 3,500 kilometers. As part of the organized train – more than fifty wagons with a cargo weight of 3300 tons net.

“Kazakhstan holds the leading positions in the world for the production of grain. The main task of the railway is to ensure timely and high-quality transportation of agricultural products, including this strategic cargo. The development of transportation along the new route will increase the transit potential of Kazakhstan, reduce turnover and accelerate the return of rolling stock by 2-2.5 times,” Mukhtar Zhambulov, Deputy General Director for Operations of “KTZ-Freight Transportation” JSC said.

From the beginning of 2018 for export 4.2 million tons of grain was delivered, which is 56% higher than the same indicator of 2017. Flour was transported 1.2 million tons, which is 8% more than in the past year. 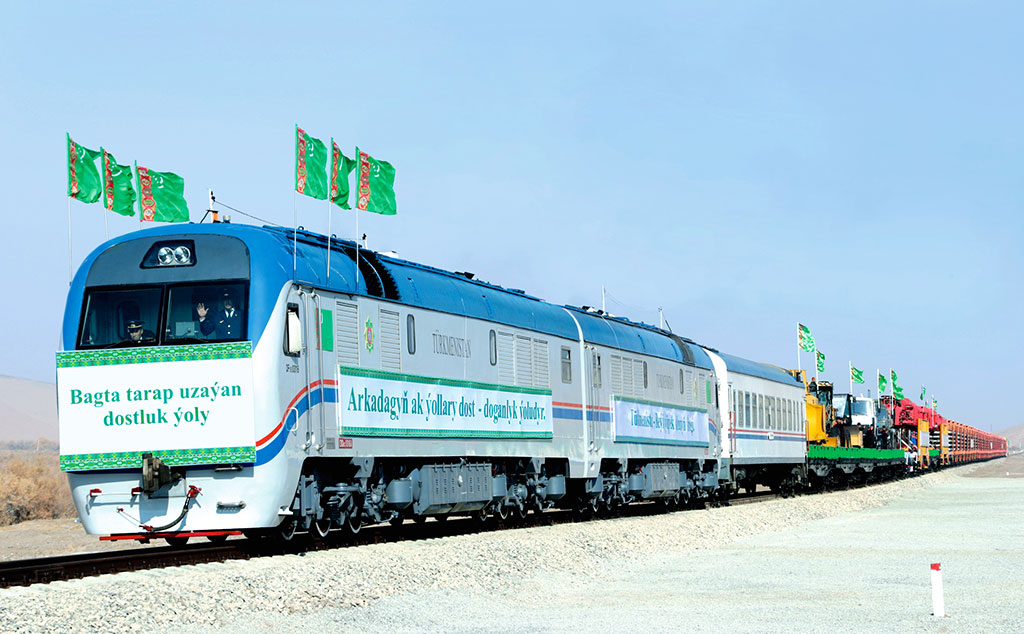 A “ceremony of launching Serhetabat – Turgundy railway” is scheduled for the second half of February 2018, with Afghanistan’s President Mohammad Ashraf Ghani planning to attend.2

There already is a railway from Turkmenistan to Towraghondi, so this project might be an upgrade rather than a new line.

The President arrived by helicopter on the morning of the construction launch event, and made a speech highlighting the importance of developing transport links.

Important role is given to the involvement of entire potential of the railway sphere in the development of all branches of national economy and multimodal system of Turkmenistan. Therefore, the greatest attention is paid to the expansion and modernization of its infrastructure.

As an example, the Head of the State gave the railway Kazakhstan – Turkmenistan – Iran, Kerky (formerly Atamyrat) – Ymamnazar – Akina. These and other routes as well those that were planned to be built open new opportunities for fruitful relations between the countries of the region and for consolidation of their economic power.

We render comprehensive support and assistance to fraternal Afghan people and will continue putting all efforts that enhance the revival of the neighbouring state, the Head of the State said, having highlighted that recently, Turkmenistan hosted the VII Regional Economic Cooperation Conference of Afghanistan where important agreements of regional importance were reached.

Having highlighted the decision on increase of the volumes of energy supplied from Turkmenistan to the Islamic Republic of Afghanistan, the Head of the State directed Turkmen railway constructors, who commenced the construction of the roads to Turgundy by the request of Afghanistan.

The President then watched a train leave Serhetabat for Towraghondi. The locomotive reportedly hauled 42 vehicles, including a coach carrying railway construction staff, track machines, cranes and other equipment and materials on flat wagons “loaded with all necessary for the construction of new interstate railway line.”

Turkmen staff are to build the railway and develop infrastructure to increase throughput at Towraghondi, enabling Afghanistan to import and export goods more efficiently and providing better links with transport corridors running east-west and north-south in Central Asia.

After watching the train depart, the President held a meeting with railway personnel who would work on the project. The railwaymen “expressed sincere gratitude to the head of state for tireless work for the happiness of the Turkmen people, for the policy of progressive reforms and reforms, for positive initiatives and initiatives that earned independent authority and recognition of the world community for the creation of all necessary conditions for quality work.”3

The President then flew to Mary airport by helicopter, before returning to Ashgabat.

To Kushka by Camel is an excellent December 2009 article by Isaac Scarborough describing trains on the Kuskha (Serhetabat) to Ashkhabad route in Turkmenistan.

For incomprehensible reasons, however, the whole edifice stood. Trains arrived – generally on time – and left, only a little late. The pistachios arrived from Kushka, tomatoes were shipped to Ashkhabad. I only had to bribe my way onto the train once, and that was from Ashkhabad home. … I always got the impression that things were just on this side of completely falling apart. The trains hadn’t been repaired in thirty years, the rails themselves were rusting and a touch warped. Stations were little more than cement slabs populated by piles of sunflower seed shells and half feral dogs. Everyone involved was somehow a little crooked, there was always an extra man or two in each compartment and the conductors spent more time drinking tea than actually paying any attention to what the passengers were doing.
Source: To Kushka by Camel, Isaac Scarborough, This Recording, December 2009

An old (1979?) photo of the Soviet-Afghan border at Kushka, showing the railway.

THE RUSSIAN MARCH ON INDIA.

Merv – once the “Queen of the World,” and a household word in England, thanks to O’Donovan and Marvin and Vambery, as the possible cause of war with Russia, whose absorption of Central Asia brought her here m 1884— just a year before Parliament, at Gladstone’s behest, voted £11,000,000 of war money at a sitting in view of Rusia’s next step south. Now the whole oasis of Merv, one of the most fertile spots m the whole world, is as Russian as Riga, and when you say “Merv” in Central Asia you mean a long, low, neat stone railway station, lit by a score of bright lamps in a row, where the train changes engines, where in a busy telegraph office a dozen operators sit before their clicking instruments; and if you are a Russian officer or official you mean also a bran new town where a pestilent malarial fever is sure to catch you sooner or later, and very likely to kill you. But Merv has long ceased to be a Russian boundary, for m the dark you can see a branch line of railway stealing southward across the plain. This is the famous Murghab branch, the strategical line of one hundred and ninety miles along the river to the place the Russians call Kushkinski Post, on the very frontier of Afghanistan, a short distance from Kushk itself, and only eighty miles from Herat. The Russians keep this line absolutely secret, no permission to travel by it having been ever granted to a foreigner. My own permission for Central Asia read, “With the exception of the Murghab branch.” A foreigner once went by train to Kushk Post, however, but this was an accident and it is another story.
This line is purely strategic and military. Neither trade nor agriculture is served by it; nor would anybody ever buy a ticket by it, if it were open to all the world. Moreover, it runs through such a fever-haunted district that Russian carpenters, who can earn two roubles a day, throw up the job and go back to earn fifty kopecks at home. The line is simply a deliberate railway menace to Great Britain. It serves, and can ever serve, only the purpose of facilitating the invasion of India, or of enabling Russia to squeeze England by pretending to prepare the first steps of an invasion of India, whenever such a pretence may facilitate her diplomacy in Europe. This fact should always be borne in mind. Nothing would embarass Russia more than to “have her bluff called,” in poker language — to be compelled to make her threat goood. But it may safely be prophesied that many a time we shall hear of troops going from the Caucasus to the Afghan frontier, as she did for an “experiment” last December, and when this happens England must look, not at Afghanistan, but to China or Persia or the Balkans. Some day — and perhaps before long — she will collect a mixed force there without England’s knowledge, and seize Herat by a coup de main, m the confident belief that the British Government will do once more That it has so often done before, namely, accept tamely the accomplished fact. In simple truth, Herat is at her mercy. And the cat does not look at the cream for ever. The Merv-Kushk line, I may add, is now completed, and two regular trains a week run over it, at the rate of something less than ten miles an hour, reaching the Afghan frontier terminus in eighteen hours. But I do not fancy that Kushk Post itself has anything very wonderful to show yet in the way of military strength. It is interesting, however, as one stands here on the edge of the platform and looks down the few hundred yards of this mysterious line visible in the dark, to reflect that if the future brings war between England and Russia its roaring tide will flow over these very rails for the invasion of India, and that if it brings peace this will be a station on the through line between Calais and Kandahar. Some day, surely, though it may be long, long hence, and only when tens of thousands of Russian and British soldier-ghosts are wandering through the shades of Walhalla, the traveller from London will hear on this very platform the cry, “Change here for Calcutta !”

There is a train in the backgrounds of this RIA Novosti photo of the Kushka (Serhetabat) area.

It seems that Turkmenistan’s national railway Turkmendemiryollari doesn’t have a website, and it is not easy to find information about its train services.

However Samuel Rachdi has done a lot of research, and as a result Turkmendemiryollari timetables can be found at his fahrplancenter.com website.

This includes a timetable for the daily return passenger train on the line built by imperial Russia from Mary to Serhetabat (Kushka), close to the Afghan border.

From Serhetabat the railway continues across the border to the freight terminal at Towraghondi in Afghanistan, but (as far as I know) this section carries only goods traffic. “Two kilometers of the 7-kilometer link lies in the territory of Afghanistan”, according to the Afghan Ministry of Foreign Affairs.

Amongst a collection of Historical Maps of India is Plate 24 Sect. III: Afghan Frontier, SE Afghanistan and west Punjab from the 1893 edition of Constable’s Hand Atlas of India, showing the never-built Chaman – Kandahar railway.

The Digital South Asia Library has a high resolution scan of the 1909 Imperial Gazetteer of India map of Afghanistan showing the Russia railway from Merv (Mary) to Kushka (Serhetabat) close the Afghan border.