The Khyber Pass Railway from Jamrud, near Peshawar, to the Afghan border near Landi Kotal was opened on 4 November 1925. Built to allow easier movement of troops to the frontier, the railway climbed more than 1,200 metres (3,900 feet) through 34 tunnels and 92 bridges, and culverts to reach Landi Kotal.

Photo taken by William Henry Jackson and published in Harper’s Weekly, 1895, now available on the Library of Congress website.

Although labelled as “Gulistan Station on the Great Military Railway, at entrance to Kojak Tunnel”, this is actually Shela Bagh station.

A very interesting claim that there were some 2 foot gauge railways in Afghanistan in 1894 (one may have been at the Mashin Khana royal arsenal in Kabul).

MINUTES OF EVIDENCE.
Narrow-gauge railways.
Wednesday, 25th July, 1894.
J Harris in the Chair:
This 2-ft. line is also established in Madagascar where the French rule, it is also in Afghanistan, Turkestan, and Siberia. It was introduced there by Skobeloff. When he was meditating the invasion of India he had this introduced, and I may state that the Russian troops were seen using one of those railways on the frontier for military purposes before the British knew anything about it. When the outposts observed it they reported it to the Commander-in-Chief and he telegraphed to the War Office. The War Office ordered railways of this sort to be sent out straight. They were sent over mountains on the backs of elephants to the frontier. In Afghanistan there are several 2-ft. railways.
Source: Narrow-gauge railways, Minutes of Evidence at the railway standing committee, Victoria, Australia. 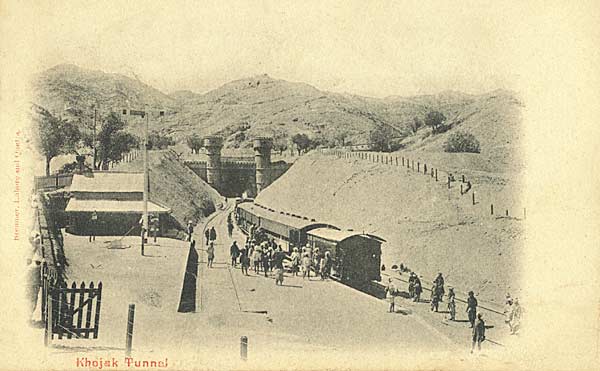 In the Tehkal Christian Cemetery in Peshawar is the grave of: “Edwin Thomas Large, who died at Shahidmaina, August 2nd 1907, while employed on the Loi Shilman Railway, aged 36 years.”

Muhammad Imran Saeed has taken a photograph of it, along with other memorials in the cemetery.

A Russian-language photograph archive with images of the official opening ceremony for the Friendship bridge between the USSR and Afghanistan on 12 May 1982, and associated events including a tree-planting ceremony on the previous day.

The photos include a view of the bridge decorated with large photos of Soviet and Afghan bigwigs – I think they are Brezhnev on the left and Afghanistan’s President Karmal on the right(?).

ON THE AFGHAN BORDER

Air Marshal Sir John Steel inspects the line of planes at the Royal Air Force (RAF) base, Risalpur, India. Formation of planes flying over Khyber Pass – problem bordering area between India and Afghanistan. Several shots of the planes in the air.

Several shots of the aircraft in flight over snow covered mountains in Afghanistan. RAF (Royal Air Force) man handle plane at base on the North West frontier. Shots of aircraft coming into land at the base. More shots of planes in-flight.

Evacuating Kabul by air in 1929, described at Historic Wings.

Another historical Afghan railway to add to the collection! I have found photographic evidence of a narrow gauge tramway in Kabul in 1904.