Speaking at the inauguration ceremony of training Afghanistan railway staff, Eslami said Iran’s development is intertwined with that of its neighbors. 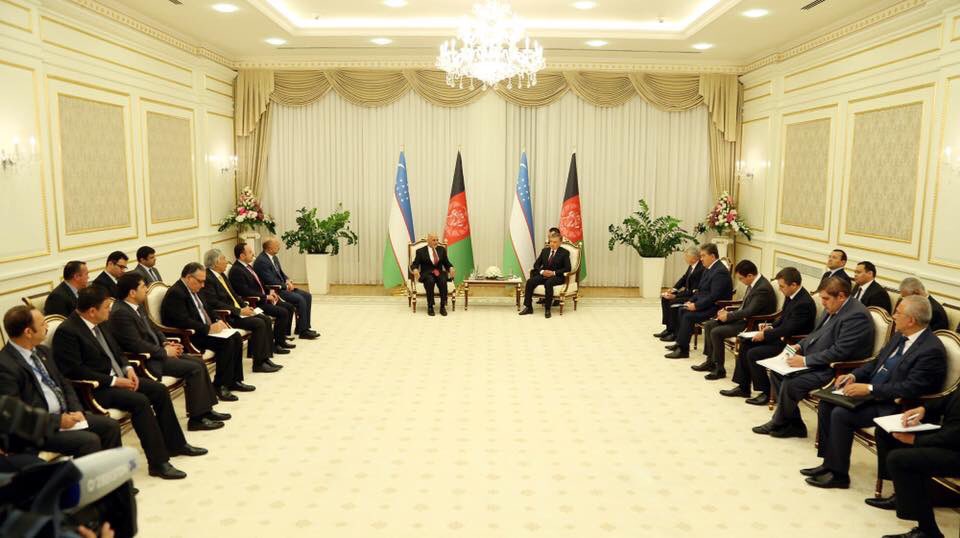 Following the international Tashkent Conference on Afghanistan which was held on 26-27 March 2018, Afghanistan’s Ministry of Finance said Uzbekistan had pledged to provide USD500m to part-fund the construction of a proposed 657 km extension of the Uzbekistan to Mazar-e-Sharif railway onwards to Herat.1 This would connect with the line under construction from Iran to Herat, providing a transit route from Central Asia, and potentially China, to Iran and Europe.

#UzAfg2018 We are jointly promoting the implementation of another strategic project
– extension of the currently operating #Hairaton–#Mazar-i-Sharif railway built by #Uzbek specialists up to #Herat. #Uzbekistan #Afghanistan

The Afghanistan Railway Authority estimates that the new line would cost USD1.8bn, and so the Afghan government is seeking additional funding from other countries.

AfRA head Mohammad Yama Shams told Tolo News that talks had begun with Iran and were ongoing with the Asian Infrastructure Investment Bank, while China was also interested in investing in the project. A contractor could be selected in the near future, according to AfRA, and construction would take two years. AfRA estimates that Afghanistan would earn about USD40m a year from the line.

in his address to the international conference,3 Uzbekistan’s President Shavkat Mirziyoyev said:

I have no doubt that in the long run peace on the Afghan soil will open up the new opportunities and bring real benefits to all states of the greater Eurasian continent. It will promote strengthening common security and stability, create favorable conditions for the construction of motorways and railroads, laying of pipelines, development of regional and trans-regional trade.
[…]
We are jointly promoting the implementation of another strategic project – extension of the currently operating Hairaton – Mazar-i-Sharif railway built by Uzbek specialists up to Herat.

This project will allow to make a real and practical contribution to reconstruction of Afghanistan’s economy, create new jobs and increase the transit potential of the country.

Launching the trans-Afghan transport-communication projects in close integration with other and not less significant regional projects such as Uzbekistan–Turkmenistan–Iran–Oman and Uzbekistan-Kyrgyzstan–China will also create all necessary conditions for the development of intercontinental transport corridors in almost all directions – from north to south and from east to west through the shortest route.

Fazel Fazly, senior aide to the President of Afghanistan, tweeted:

Let’s start this morning with a good news- #Uzbekistan pledges to contribute 500 million USD for the construction of Mazar-i Sharif – Herat railway. #UzAfg2018

This is a good start for #Afghanistan bilateral ties with #Uzbekistan in the post Karimov era. Economic interdependence is an effective deterrence and guarantor of peace and stability in Central and South Asia. #UzAfg2018 https://t.co/74JBLZVo8y

This is encouraging news for Afghanistan of course but a lot of questions on details remain unanswered; a joint doc/strategy should explain how this railway will be built & timelines – security issues top concern too @EklilHakimi https://t.co/N2139n04ri

On 18 December 2017 the National Procurement Commission approved nine contracts worth a total of more than 4.7bn afghanis,1 including one for the the maintenance, operation and management of the Hairatan to Mazar-i-Sharif railway.2

No further details are given. So far the line has been operated by the Sogdiana Trans subsidiary of Uzbekistan’s national railway UTY under an initial contract awarded in July 2011 and then a three-contract awarded March 2015.

Afghanistan’s President Mohammad Ashraf Ghani paid an official visit to Uzbekistan on 4-6 December 2017, at the invitation of President of Uzbekistan Shavkat Mirziyoyev.

In a joint statement:

11. The Presidents noted the priority importance of bilateral cooperation in the field of transport and transit corridors, which provide the shortest and most effective access to foreign markets.

In this regard, the Parties agreed to further intensify mutual efforts aimed at ensuring the construction of railways and highways, as well as facilitating the development of transit traffic and trade on the territory of Afghanistan. In particular, based on the efficient bilateral cooperation and the experience of mutual benefit, the Parties agreed to jointly implement the following projects aimed at further development of transport infrastructure in Afghanistan:

The Presidents welcomed the signing of cooperation agreements on the “Termez-Hairatan” bridge between the relevant organizations of the two countries.

Remarking on the importance of transit facilitation between the two countries, President Ghani said that the agreement on implementation of Mazar e Sharif – Herat Railways will contribute to regional connectivity and allow smooth flow of exports. He said, “This is one of the major regional transit projects and both countries are earnestly working on the implementation and funding.”

Source: President Ghani: A New Chapter Of Afghan-Uzbek Relations Has Been Opened Out, Office of the President, Islamic Republic of Afghanistan, 5 December 2017

We have to make every human effort to see Surkhandara connected to Puli-Khomri through the transmission line. And we have to devote the next month to see how we are going to move to implementation and financing the railway from Mazar-i-Sharif to Herat.

20 documents aimed at further strengthening of cooperation in political, trade-economic, investment, transport-communication, scientific, education and other spheres were also signed. They include documents on establishment of a joint commission on the issues of security, provision of legal assistance in civil, family and criminal cases, construction of Surkhan – Puli Khumri power line, the Mazari Sharif – Sheberghan – Maymana – Herat railway, the interaction in the sphere of freight and customs.

Source: Documents have been signed, Press Service of the President of the Republic of Uzbekistan, % December 2017

Development Comes on a Train for Afghanistan’s Northern Regions is a video about the Mazar-i-Sharif railway published by the Asian Development Bank on 6 Ocotber 2016.

You wait for ages, then two China to Afghanistan freight services start at once.

This second service set off from Yiwu in eastern China’s Zhejiang Province on August 28, carrying 100 containers of goods worth more than US$4m. The 7500 km journey to Mazar-i-Sharif via Kazakhstan and Uzbekistan was expected to take 15 days. A weekly service is planned by the end of the year.1

The contaners are carried on flat wagons, rather than open wagons as with the train from Nantong.

“Afghanistan’s once teeming Silk Road border town of Hairatan, a door to Central Asia, sees few travellers these days — its decline a barometer of economic depression in the country’s north”, says AFP.

The Asian Development Bank website has published some photos by Kabul-born documentary photographer Jawad Jalali, who “traveled across Afghanistan to capture the country’s development through his lenses”. He said “the most amazing thing for me is the railway, for the first time I was experiencing a train in our own soil and country.”

According to ADB, “an expanded railway system covering 4,425 kilometers is expected to be developed in the future and is expected to connect the majority of the country’s population centers”.

Late into the execution of the project, [anti-vehicle mines, anti-personnel mines and explosive remnants of war] were discovered. The initial assessment revealed a 3 sq km area of contamination at an estimated cost of USD 3 million to clear, which came close to matching Afghanistan’s national contribution to the project.

As a result, MACCA actively encourages a sustainable and continuous process in communication with the development sector; otherwise, as in the case of the railway project, the country suffers huge financial losses that it cannot afford.

On pages 64-65 the report discusses the impact of mines (of the explosive variety) on the Aynak copper mining project.