Construction of the approximately 191 km railway from eastern Iran to western Afghanistan’s Herat province is being undertaken in four sections, two in each country. The third section taking the line as far as Rosnak was completed in December 2020. The fourth section is being planned, and will take the line closer to the city of Herat. 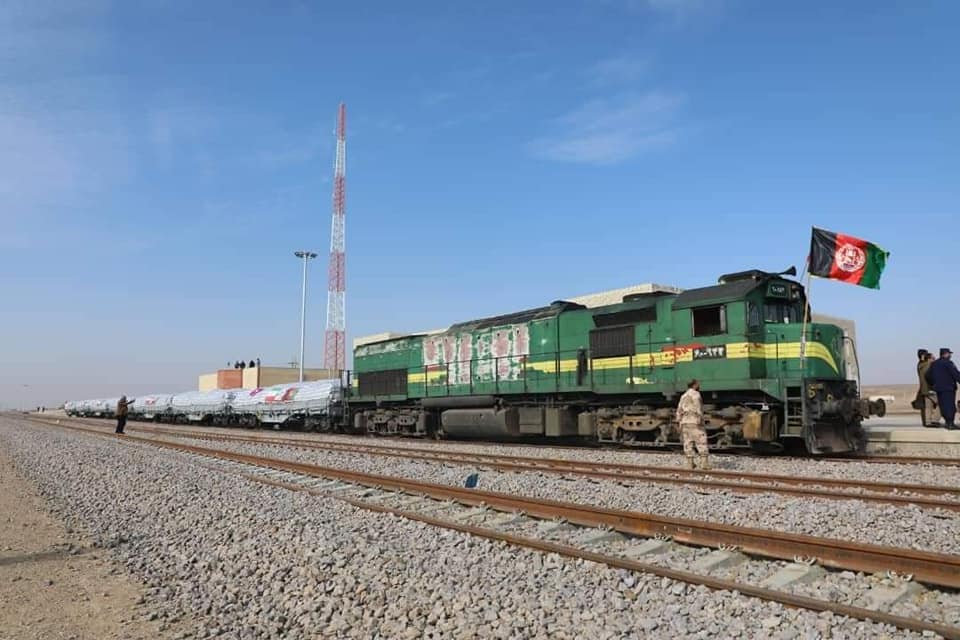 The Iranian government funded a number of developments in Afghanistan’s Herat province following the fall of the Taliban regime, including the USD68m construction of a 123 km surfaced road from the border at Dogharoun near Islam Qala to Herat 12 which was inaugurated on 27 January 2007.3

On 28 February 2002 Iranian Member of Parliament for Khaf & Rashtkhar and Chairman of the Iranian-Afghan friendship group Gholam-Heydar Ebrahimbay-Salami announced that USD25m had been allocated in the 2002 budget bill for the construction of a railway from Torbat-e-Heidarieh in Iran to Herat.4 Funding would also come from international aid and the Iranian Commission for the Reconstruction of Afghanistan. The plan would be based on the 1975 preliminary studies by Sofrerail, and future traffic would include iron ore.5

The project got underway in June 2002 when the Iranian Transport Ministry and Afghanistan’s Ministry of Public Works signed a memorandum of understanding.6

A further agreement was signed during a visit to Tehran by Afghan President Hamid Karzai on 26-29 May 2006.7

In June 2006 Afghan officials visited Iran, and Es’haq Naderi, economic advisor to President Karzai, agreed plans for the construction of the railway with Islamic Republic of Iran Railways Director-General Mohammad Saeednejad. Iran committed to meeting 60% of the project costs from funds it had previously allocated to Afghan reconstruction programmes. Preliminary studies had already been completed for a 189 km route (86.8 km in Iran), and tendering was expected soon afterwards.8

Freight will be the principal source of revenue, with traffic forecast to reach 6·8 million tonnes/year including oil products, iron and steel as well as industrial goods. The alignment was designed for passenger trains to run at 160 km/h, and studies have predicted 321 000 passengers a year.9

The chosen route is an extension of the existing Iranian line to Khaf, and thus takes a different route to previous proposals for an Iran to Afghanistan link which had focused on a more direct route running outheast from Mashhad to the border at Islam Qala.

The single-track railway built to Iran’s 1435 mm standard gauge (see note below for more detial of the gauge issue) starts at Khaf, the penultimate loop on the line to Sangan. It then heads south and then east through a rugged and arid landscape. The border between Iran and Afghanistan is reached after 77 km. 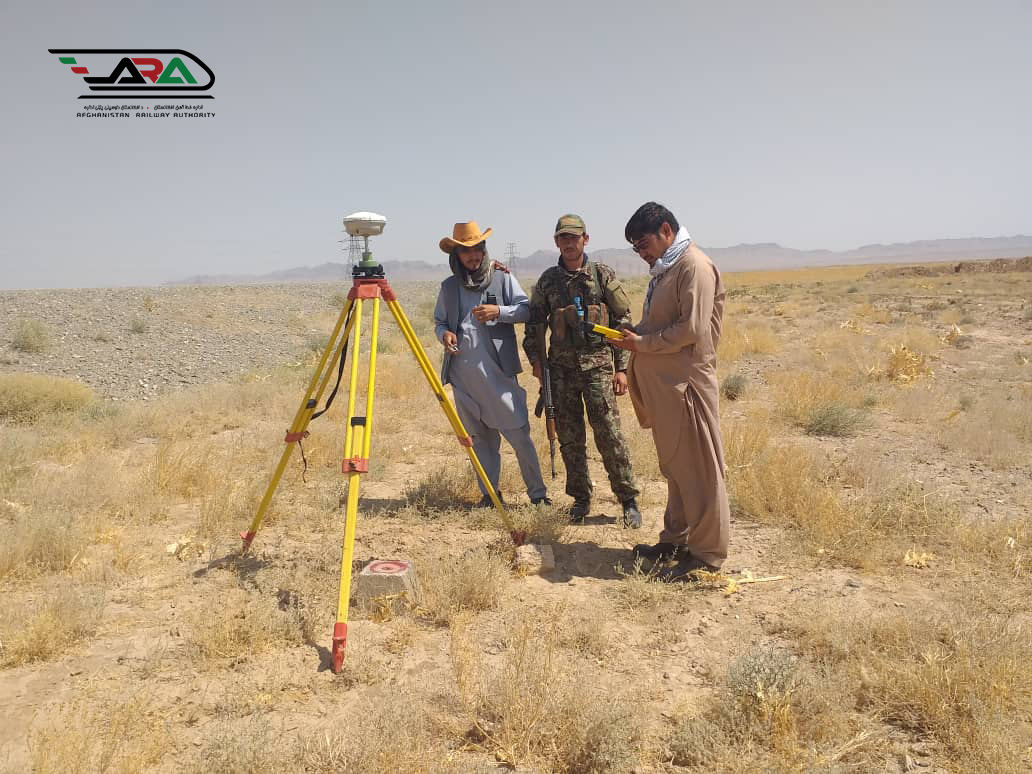 In September 2020 the Afghanistan Railway Authority said detailed design for the second phase of the fourth section of the Khaf-Herat railway had been completed and procurement and construction was ready to begin (Photo: AfRA)

At least part of the construction work for the first sections was undertaken by Abad Rahan Pars, which had a contract worth USD40m19 awarded by Iran’s Ministry of Road & Transportation in January 2007 and supervised by Iran Eston (who I can’t find mentioned elsewhere).20

Iranian company Ballast was awarded a contract to supply equipment and materials and undertake construction and installation works including laying rails for the section of the route in Iran’s Razavi Khorasan Province. This covered the 76.8 km route-km from the 24 km point on the Sangan – Torbat Heydarieh railway to the border point 78.8 km along the route at Shamtigh. The railway is designed for a 25 ton axleload and speed of 160 km/h. The scope of the nine-month contract included supplying 90 track-km, 54 turnouts, 224 000 m3 of ballast, 150 000 sleepers and 11 000 tons of rail.21

In a written answer in the British House of Commons on 21 November 2007, Minister for International Development Shahid Malik responded to a question on Afghan railways. “In early 2006 Afghanistan began work on a railway project connecting Hirat [Herat] city to the Iranian border at Sangan. 60 per cent. of the project is funded by the Iranian Government.” Malik said discussion was underway on constructing lengthier railways in Afghanistan, but he cautioned “there needs to be a very careful economic cost-benefit analysis of any major railway investments to ascertain whether this is the best use of investment resources as compared with other priority investments.”22

The project was slowed by “security challenges”.23 In November 2007 an Iranian engineer working on the railway was kidnapped by armed men while in the Ghoryan district. He was subsequently released, and the head of Herat Security Command’s press office, Nour-Khan Nikzad, “did not rule out the possibility of financial motives behind the abduction.”24

In May 2008, Hamid Behbahani, Iran’s Deputy Minister of Roads & Transportation, said 60% of the work in Iran and 40% in Afghanistan had been completed.25.

In October 2008 Iran’s Ministry of Public Affairs said the line was being built by the government of Iran, was still 60% complete, and was expected to be completed by the end of the year. “The ministry said it planned to build more railway lines to meet the demand for transportation links between Afghanistan and its neighbours, who use Afghanistan as a transit route for goods travelling to other parts of the region.” Rail was said to be five times cheaper than transporting goods by road, but construction of 1 km of railway in Afghanistan “costs about $2 million” according to the Ministry, “and a planned railway between Herat and Tajikistan will cost about $4 billion”.26 These numbers don’t seem to add up, though there may be extra costs for specific major works such as bridges, plus freight terminals and the like. 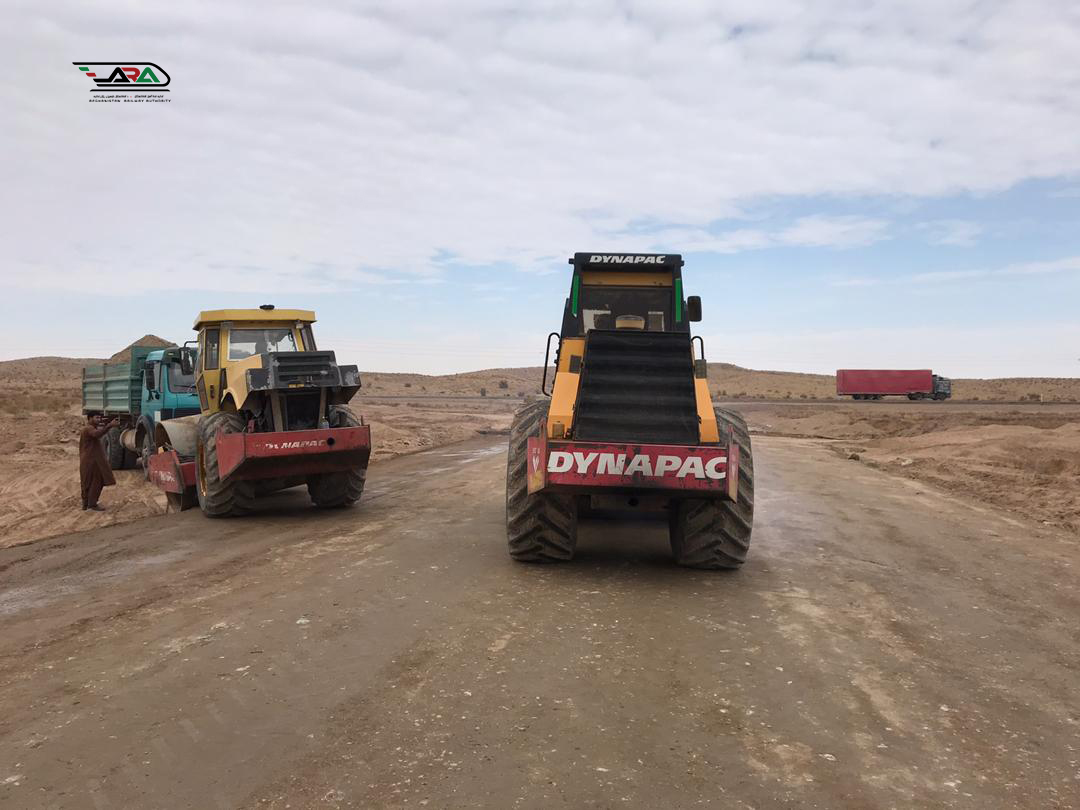 In January 2009 Quqnoss reported that construction was underway, in an article which talked about the line being the first stage of a $2bn 1200 km route between central Asia and Iran which would be completed throughout in five years.27

In March 2009 the railway “to the Maslakh in Herat” was reported as 97% “accomplished” and it was to be “used as soon as possible”. Maslakh is the site of a camp for internally-displaced persons, around 20 km west of Herat. “The construction work has been accomplished at least 97 percent in Zanga Saba village of Ghoryan district. 200 bridges and ditches have been built.”28

Two police officers and two Taliban militants were killed in an armed clash at a checkpoint in a railway area in the Ghoryan district on 1 July 2009.29 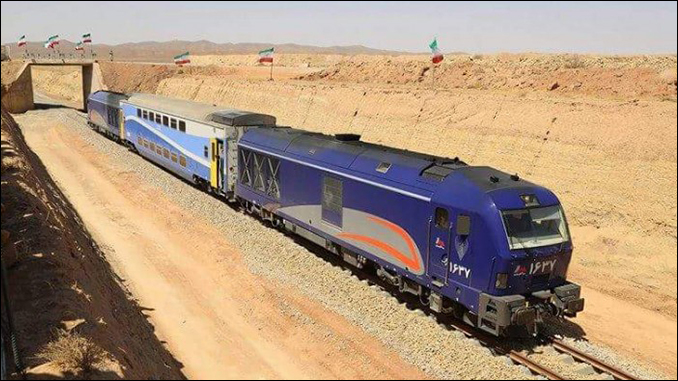 A ceremony at the border point of Chahsorkh in Herat Province on 7 September 2016 marked the completion of track laying as far as the border and the start of tracklaying on the third stage, and first Afghan section, of the route.30

Iranian ambassador Bahrami said the railway project had been delayed by several years, but Iran had finally finished its section; many people would be watching the Afghan portion closely.31. The first section inside Afghan territory was the 62 km in Ghoriyan district, which was expected to be completed in 4 months.32. The fourth section that would connect to Herat city was in the early planning stages, with Italy promising funds for it.33

Afghanistan’s Minister of Public Works, Mahmoud Baligh, said the Afghan government would provide security for the staff constructing the railway as the corridor was of great significance for improving Afghanistan’s trade with the open markets of the world. Minister of Finance Eklil Hakimi said the railway would boost the volume of trade between Iran and Afghanistan from USD2m/year to USD6m.

“This project enhances bilateral relations of Iran and Afghanistan”, said Iran’s Roads Minister Abbas Akhundi, “and it links Afghanistan with Europe, China, and Central Asia via the transit corridors of Iran.”

Contracts for the construction of administrative buildings for the Herat and Balkh railway directorates were signed on 3 February 2018 by Afghanistan Railway Authority Director General & CEO Mohammad Yamma Shams and Mohsen Amin, Deputy Manager of State Corps.34 State Corps is a construction company which began by working on projects for the United State Army Corps of Engineers, and the expanded into the energy sector where it has woorked on high voltage transmission lines and other power distribution projects.35

On 18 February 2019 Afghanistan’s National Procurement Commission approved the 43 km Phase 1 of Stage 4 of the line, covering the section from Ghoryan district to Rabat Paryan. This was to be be built by a company from Kazakhstan and financed from the Afghan government’s development budget.17

On 19 May 2019 a “terrorist mine explosion” killed and injured a number of Iranian and Afghan nationals working on the railway project.39

On 15 January 2020 the Afghan parliament approved a €65m long-term loan from Italy for the Rabat Beryan to Herat airport section of the project. The 40-year loan with a 29 year grace period will be paid in installments of €40m, €40m and €25m, and no interest will be charged.40 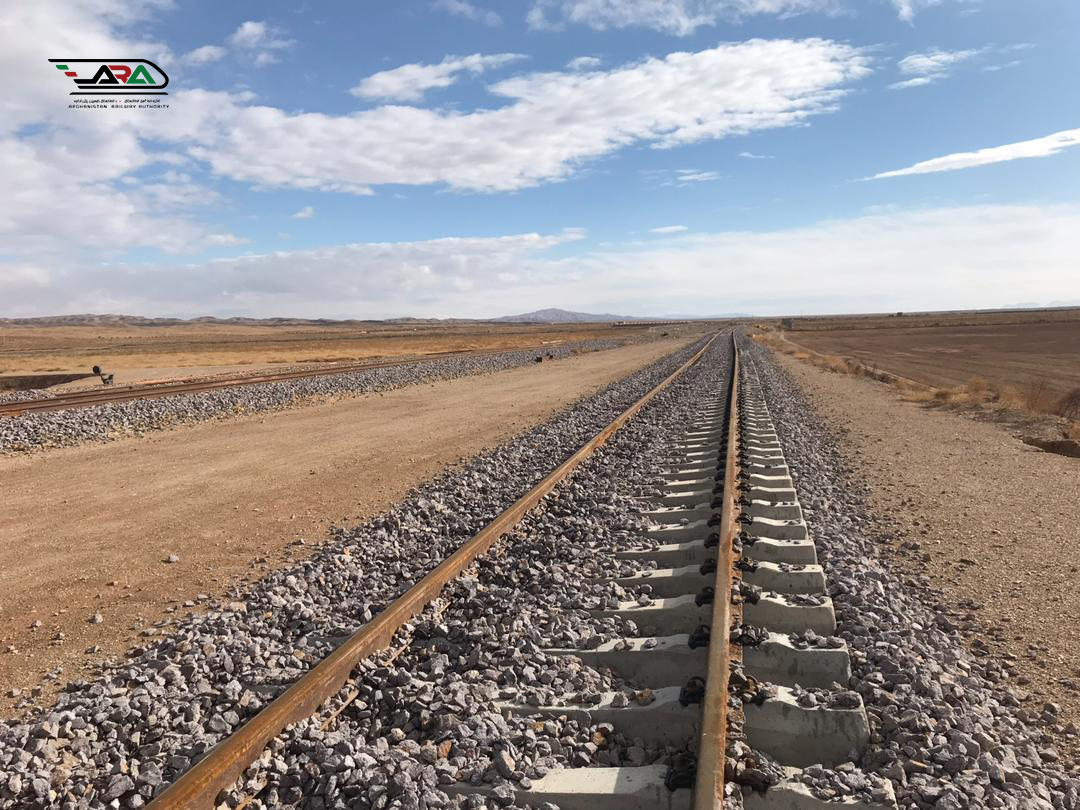 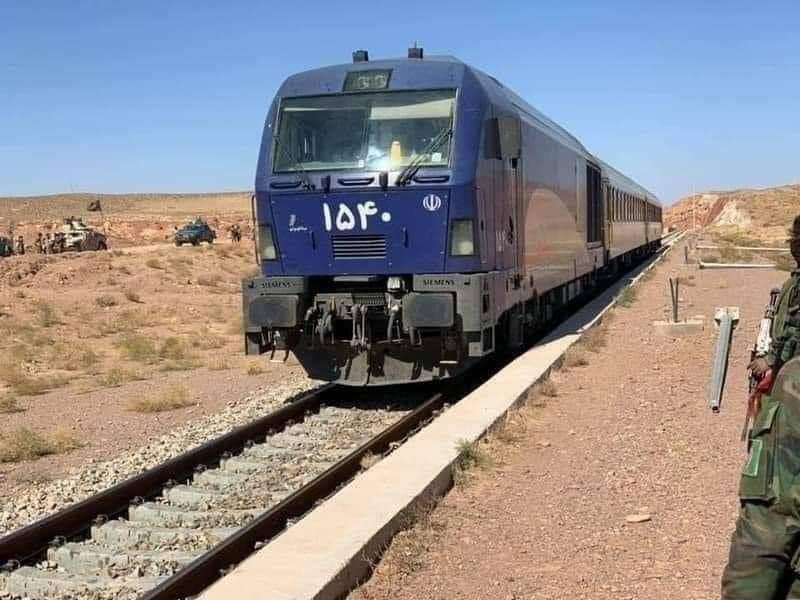 On 28 October 2020 a test train carried officials from Iran and Afghanistan on the 62 km third section of the railway under construction from Khaf in Iran to Afghanistan’s Herat province.41 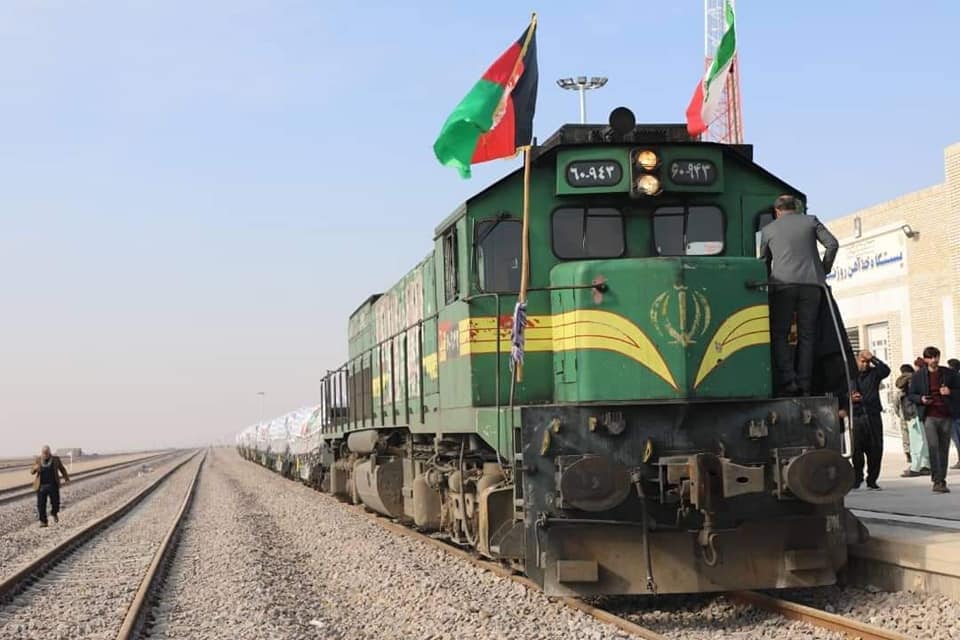 A trial freight train on 2 December 2020 delivered 500 tonnes of cement on the new railway from Khaf to Rosnak (Rahzanak, روزنک). A passenger train also ran from Iran to bring officials to and from a meeting with their Afghan counterparts.

A note on place names

The romanised spelling of the various place names varies quite a bit, and its not uncommon to see Herat fall victim to a spellchecker and become “Heart”.

This means that in the event of a futue railway line being built from Herat to Torghundi (for Turkmenistan) or Mazar-i-Sharif (to connect with the line from Uzbekistan) there would have to be a break of gauge somewhere. While gauge-changing trains exist, for most freight you may as well just transfer containers between ordinary wagons of different gauges, which is what happens every day on the border between China and the 1520 mm gauge region.

Next page: Herat to Mazar-i-Sharif and beyond