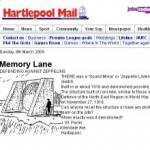 There was a sound mirror at Hartlepool, but unfortunately it has been demolished.

The Historic England listing for the Boulby sound mirror says the Hartlepool one was “located at High Springwell 17km away [from Boulby] to the north of the estuary and was orientated to cover the north eastern approaches” and “was demolished in the 1960s.”

There is a reference to this Hartlepool sound mirror on the Hartlepool Mail website dated 20 June 2007. Hartlepool resident JW Perrin mentions a sound mirror or “Zeppelin Listening Post” in the Clavering area, and asks for more details. Perrin says the mirror was constructed in or about 1916, which would make it a contemporary of the Redcar structure. A sketch accompanying the text shows a mirror with the same design as the ones at Boulby and Redcar. It was “demolished possibly in the early Sixties when the new housing development commenced”.

Perrin says the Hartlepool mirror “played an important part in the Air Defence of the North-East Region in World War One, including the shooting-down of the Zeppelin over Teesmouth on November 27, 1916”. This was L34 (LZ.78), shot down by 2nd Lieutenant Ian Pyott flying BE2c aircraft number 2738. Photo of the Zeppelin in flames, information on the German officer in charge, information on the raid.