Two sound mirrors survive on the White Cliffs to the east of Dover in Kent. These are constructed a different way to the other surviving mirrors, being set into a hillside.

According to the National Trust, the first mirror dates from approximately 1917. It is 15 feet high, cut into the chalk cliff and lines with concrete. Surviving records show it was in use during World War I to detect incoming aircraft in 1917-18. The sound mirror worked by concentrating sound waves into a central point, where they were picked up by a listening apparatus facing the curved surface. An operator who was specially trained to distinguish different sounds would be stationed at the front of the sound mirror, and use a stethoscope to listen for aircraft.

The second mirror is thought to date from 1920-29. It was built in a similar way to the older mirror, but is larger at 20 feet high.

The two mirrors were buried in spoil by the council in the 1970s as part of a campaign to clear up the local area. The land was purchased by the National Trust in 2012 after a public appeal raised £1.2 million.

Got to see some of the White Cliffs sound mirrors excavation in person today! pic.twitter.com/IoT67qky0w

On 3 May 2014 volunteers from the Dover Archaeological Group, the Canterbury Archaeological Trust and the National Trust dug several trenches to locate the sound mirrors. 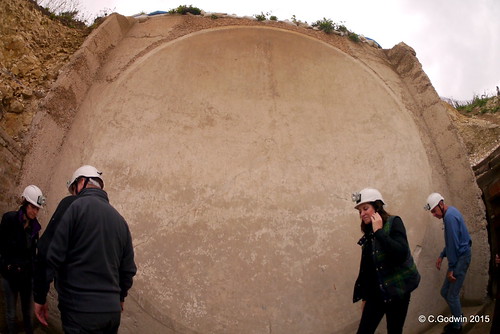 This project was part-funded by a £15 000 Landscape Heritage Grant from the Heritage Lottery-funded Up on the Downs Landscape Partnership Scheme, and was also supported by donations from the Subterranea Britannica archaeological society. 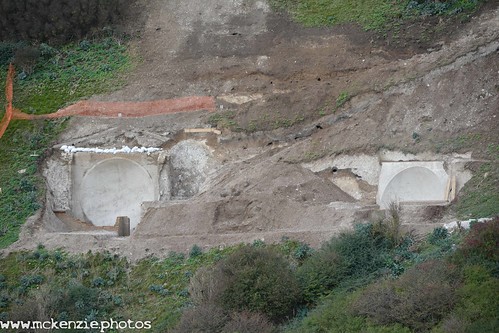 Happily, the dig found that “the Fan Hole sound mirror complex remains around 90% complete, preserved below dumped 1970s soil and rubble”, and “only fairly limited restoration work would be required to stabilise these structures and leave them open for permanent display”.

The sound mirrors are located at Fan Hole, east of Dover. The site is accessible via a waymarked walking route across the White Cliffs of Dover. A car park is open daily, with a tea room, shop and toilets are available at the White Cliffs visitor centre.

Details of how to visit the Fan Bay deep shelter.