A comparison of the 1941 watercolour painting “Bombing the Channel Ports” by war artist Eric Ravilious, and the same view of the Abbott’s Cliff sound mirror on 13 August 2017.

The painting is described by the Imperial War Museum as showing “a deserted coastal road that leads past an ‘acoustic mirror’ early warning device. In the top right of the composition there are searchlights beaming up into the sky, and a large circular glow of light to one side.” 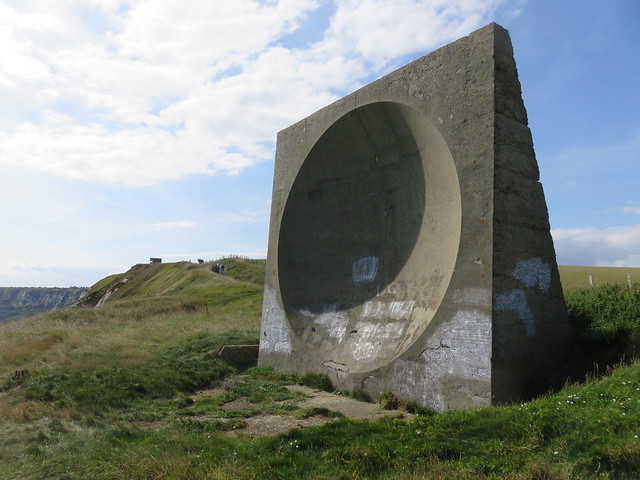 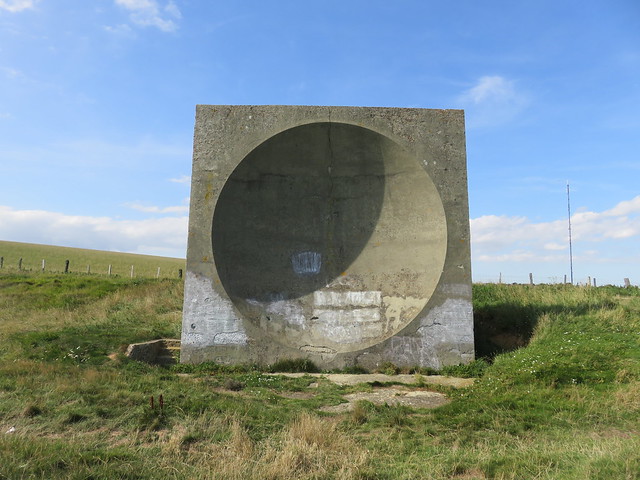 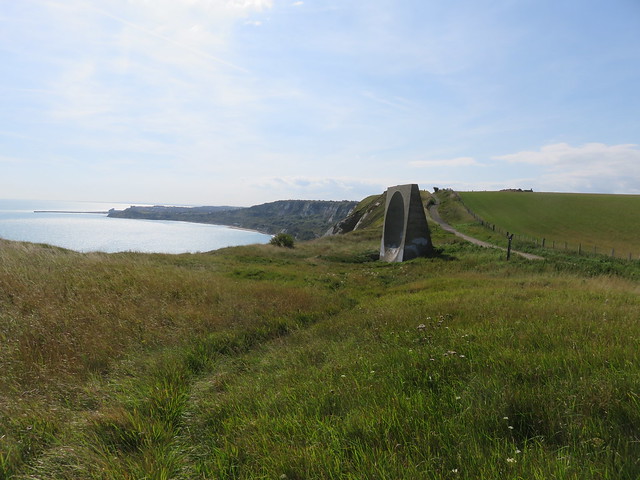 Abbot’s Cliff Sound Mirror – Strait of Dover is a picture of a “sound mirror” built during the World War II era for the purpose of amplifying the noise of approaching aircraft. […] Beam’s camera translates light and shadow into a negative, and then a print, the sound mirror takes what is unheard out of thin air and translates it to something we can hear. The old Zen question about the tree falling in the woods is meditative, but it is also scientific: If there is no one around to hear it, it definitively does not make a sound. Similarly, if there is no eye, there is no image.

The effectiveness of Beam’s pursuit is deepened by Section of Abbot’s Cliff Sound Mirror, prints made from charcoal rubbings of the stone mirror itself. […]
Source: “Robert Collier Beam: Scry” at Pump Project, The Austin Chronicle, 26 May 2017. 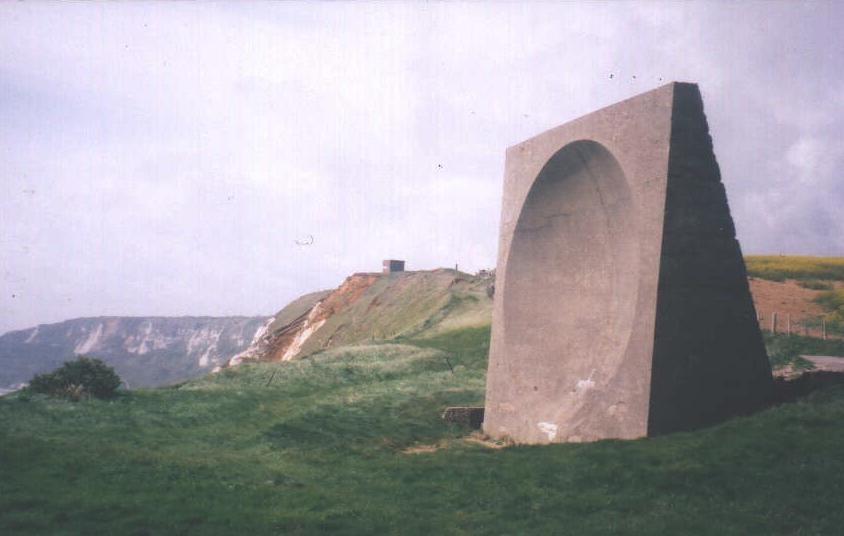 The Guardian article How to amuse yourself in a 14-hour queue at Dover suggests: “The A20 between Folkestone and Dover can be an area of breathtaking beauty, with sea views and endless greenery to distract you from your hellish conditions. Get stranded in the right place and you could go and explore the Abbot’s Cliff sound mirror, or the Samphire Hoe nature reserve.”

"Sound mirrors are no longer a failed technology. They are art." https://t.co/cNQixCkKxD pic.twitter.com/2gbC02lJ4T

The mirrors’ fruitlessness may be forgiven if only because of the uncanny impression one gets that they were built for a future not yet seen or understood. Indeed, its second life as a monument and relic has been more enduring than its first.

Christo Hall visits the sound mirrors on the Kent coast with photographer Stuart Leech and “finds an obscure functionalism melting into majestic land art”, in The Second Life Of Concrete: Brutalism’s Renaissance, published by The Quietus on 10 July 2016.

The song is “based around the idea of a delicate relationship that was slowly coming to an end and eventually finding a solace in the fact it had ended”, according to an article at Pigeons and Planes. It’s perhaps not the most cheerful ditty, but does have a sound mirror.

I Gave It All

The videos were directed by Eoin Glaister and filmed in November. Make up artist Anna Inglis Hall tweeted this picture:

We have new T-Shirts! Designed by Liam and screen printed in Canterbury by @bluebirdpress http://t.co/yqSWAjcUEK pic.twitter.com/k2DJ8exmu7

The second album from Canterbury psych-rock quartet Syd Arthur is called Sound Mirror, and features the Abbot’s Cliff acoustic mirror on its cover.

“From the tantalizing ‘Garden Of Time’ to the prophetic ‘Sink Hole,’ ‘Sound Mirror’ expands and refines Syd Arthur’s already uncommon sonic multiverse into a brave new space where focus and concision is as essential as freewheeling abstraction and genre-shattering creativity”, apparently.

Sound Mirror will be released through Harvest Records on 2 June 2014.

Compare the painting with this May 2003 photo:

Thanks to Eddie Bromhead for letting me know about the painting.