Given the outbreaks of anti-photography paranoia which have occurred in Britain in recent years, I was amused to stumble across this 1938 Railway Gazette article “Amateur railway photography in Germany”, reporting that the Reichsbahn had recently clarified that railway photography was permitted from public areas.

The report was published on 15 April 1938 – the week in which you-know-who’s party won more than 99% of the votes in the final “election” before the war. 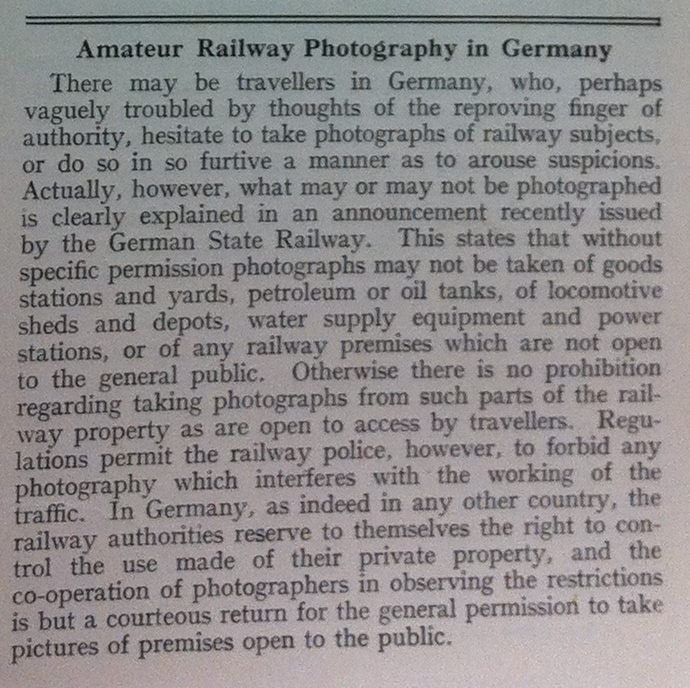 … and photography is illegal. At least that is what I was told by staff on the platform on 10 January, in my first taste of the anti-photography paranoia Britain is getting a reputation for. This was all quite bizarre, and led to a member of staff threatening to make malicious accusations against a passenger. The DLR extension to Woolwich Arsenal opened on 10 January. I wasn’t keen enough to do the first train at an unearthly hour, so wandered along in the evening. As one would expect there were a number of passengers just along for the ride, and on arrival some of us took photographs of the train (above). The staff from the train seemed perfectly happy with this.

I then went to get a picture from the other end of the train, but was accosted by a member of the station staff demanding know what I was doing. Erm, taking a picture of the new railway. He told me that was illegal(!), demanded ID, and called over a posse of staff – maybe about half a dozen or so.

I was puzzled by this. In general it is not illegal to take pictures in Britain, there were no signs saying it is banned in this specific case, other railways don’t ban it, and I’ve never had trouble in the past (even abroad in places like Republika Srpska or the Turkish border). So was it really illegal? They threatened to call the police, and I said I had no objection to this.

One member of staff who gave the impression of being more senior admitted that no, I wasn’t actually doing anything wrong by taking pictures (as usual, there is no law against taking pictures, but no right to do so).

That should have been the end of a pointless episode. However the conversation took a bizarre turn. One member of staff started getting angry. She claimed that I should not be on the station because it was “not open” yet.

This was flying in the face of rather overwhelming evidence: the start of services had been announced, and the trains were clearly carrying passengers – including me when I arrived!

Now things turned from strange to actually rather worrying. She said would have me “done for verbal”, and would make a claim of assault against me. Jabbing a finger towards my nose, she threatened to accuse me of assaulting her. This seemed suspiciously like some kind of ‘script’ intended to wind me up, presumably to try to provoke a real inappropriate response. However I’m not that sort of person, and refused to rise to the bait.

I politely pointed out that presumably we were on CCTV, so any claim could be checked. She thought for a moment, then decided that perhaps she wasn’t going to make false accusations after all!

The British Transport Police had arrived. They were a lot more professional, shuffled the staff off, agreed that there was no ban on photography, that people with valid tickets were perfectly able to use the railway, and I wasn’t committing any offence.

While the DLR is of course free to prohibit photography (though it would be sensible if this were to be advertised, as no such prohibition exists on the Underground or National Rail networks), the aggressively confrontational attitude shown by staff was rather worrying. It is completely unacceptable to threaten the public with malicious and utterly fictitious reports of assault, which can only devalue genuine concerns for staff and passenger safety.

Anti-photography paranoia is reported to be a growing annoyance in Britain (if you have a camera which isn’t part of a mobile phone, you must be either a terrorist or a paedophile, and possibly both), but the idea that a member of staff feels able to threaten passengers with completely false claims of assault is very worrying.

Yes, I’ve made a written complaint to the DLR, and I’m looking forward to reading their response.

Trainspotting may be an activity of limited and indeed questionable appeal, but it is not a criminal offence and it is not a terrorist threat.
Norman Baker MP

Normal service will now be resumed, with photos of trains in war zones. DLR contractor Serco also operates and maintains the ballistic missile early warning system at RAF Fylingdales on the North York Moors, a modern successor to the sound mirrors.

Thank you for your email, I have searched my database and paper trail, I am unable to find any previous correspondence from you, I will endevour to answer your questions you posed in you letter.

> I would be grateful for answers to these specific points:
> * Why are staff telling members of the public that photography is illegal when other members of staff and the police clearly informed me that this is not true?

As I am sure you are aware security issues have become more into the news over the past 6 months, our staff, especially the newer staff at Woolwich Arsenal are more sensitive regarding this more experienced staff. you are able to take photographs, but not able to use a tripod, or take photographs in a unsafe place.

> * Why was I told that the station was not open, when this was again clearly not true?

Even though the station was open, we call this a soft opening, the official opening was on the Monday, because of Woolwich Arsenal being brand new station, all staff were told to be very aware of anything unusual and be very security minded.

> * Why were accusations levelled against me that can be disproved by viewing the CCTV images?

I am sorry accusations were levelled against you.

> * Will staff training be instigated to address these issues?

Staff Training is carried out every year, new staff are subject to a 6 month probationary period, any issues that arise will be addressed in their monthly meetings