I have updated the WordPress theme for this site to one which is pretty similar but hopefully more mobile-friendly. Let me know if anything doesn’t work. 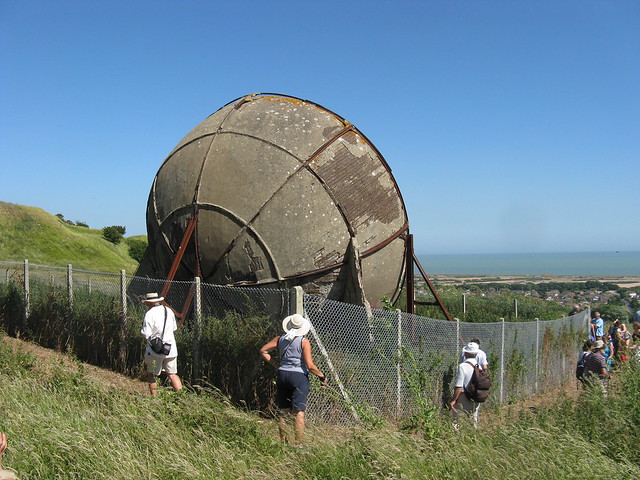 They are designed for Aeronef, a form of wargaming based on “an alternate history in the late 19th Century when the aircraft has been invented several decades earlier than the Wright Brothers actually managed. The nations and empires of the world battle for supremacy of the skies in giant aerial ships known as Aeronefs, lighter-than-air dirigibles (‘Digs’) and small fighter and bomber aircraft.”

Tony Francis of Brigade Models tells me that while the models are based on the Denge sound mirrors they are are not exact replicas; he worked from photos and satellite images to produce something that looked roughly right. “Although they are really First World War technology rather than late 19th century, we’ve appropriated them as being ideal for our Victorian science-fiction alternate history games”, he explains.

The 200 ft mirror comes out at about 50 mm long, while the two small ‘ears’ are about 10 mm. They are produced in pewter from masters which were created using a 3D modelling package and 3D printing.

For more details of availability and how to order, see the Brigade Models website.

Garrett G Jones on sound mirrors at the Designing for Human Behavior blog at the University of Texas at Austin School of Architecture:

…. Microphones placed at foci the of the reflectors enabled a listener to detect the sound of aircrafts several kilometers out in the English Channel. My idea takes this primitive device and relocates it within modern contexts. Sound mirrors or sound theatres can be used at a more urban or residential scale as installations for people to sit and interact within. The premise is to sit within the concrete dome, which could be oriented in any direction, and that sounds of the surroundings become amplified as they are reflected and echoed within the dome.
[More]

An open weekend on 30-31 May 2009 allowed the public to visit the Drop Redoubt, a fortress situated on Dover’s Western Heights.

One of the most important and impressive fortifications in Britain, the Western Heights are a series of strong points linked by miles of ditches on the western hilltop above Dover. They were originally begun during the American War of Independence, were strengthened during the Napoleonic Wars and updated and strengthened again in the mid nineteenth century.
Western Heights Preservation Society

Open days are infrequent, but it is well worth a look around if you get the chance to visit. There are no sound mirrors(!), but the redoubt is very impressive, with immense walls surrounded by deep ditches. The entrance drawbridge is gone, so access is via a tunnel into the moat, and then into the fortress building through a sally port.

There were various re-enactors there and a vintage bus service from the town to the redoubt – though it isn’t far to walk.

The Whipple Museum of the History of Science in Cambridge has a webpage about some parabolic sound mirrors to reflect and focus sound.

This apparatus consists of a pair of brass parabolic reflectors mounted on wooden stands. One of the reflectors has a bracket with a hook for hanging a pocket watch. The demonstrator would use this apparatus to show how the sound of a ticking watch may be heard at a considerable distance having first been made into a beam, projected over a distance and refocused. Very little is known about this pair of mirrors in the Whipple’s collection. It is thought that they were made in France or Germany during the second quarter of the nineteenth century.
Source: Whipple Museum of the History of Science

Dave Snowdon went on a guided walk to the sound mirrors of Lade Pit, Dungeness on 17 August 2008. There were, apparently, 261 people who attended this walk. The largest group in the 11 years Dr. Scarth has been giving these talks.

He has some photos of the mirror and the crowds on his website.

The Romney Marsh Countryside Project has announced the dates when the sound mirrors at Denge can be visited in 2009. Due to the overwhelming popularity of last years Echoes of the Sky tours we are making a few changes this year. We will be holding a new open day on Sunday 19th July. The island will be open from 10am in the morning until 5pm. Dr Richard Scarth, an expert on these structures, will be present to answer any questions. We will have a number of staff stationed at key places to help direct people to the island. There will a member of staff on the bridge asking for a £2 donation per person to cover costs. Parking is available at Lade car park, opposite Taylor Road on Coast Drive (halfway between the Pilot Pub and Romney Sands) (TR 085 208). This will be a non-booking event, you just need to turn up on the day. The walk will be across shingle. For anymore details contact the Romney Marsh Countryside Project on 01797 367934 or email us at mail@rmcp.co.uk.

As well as the new open day we will be holding two guided walks on Sunday 16th August and Sunday 13th September. They will be lead by ourselves and Dr Richard Scarth, the world’s expert on these structures. The walks start at 2pm and we will be meeting at the Lade car park opposite Taylor Road on Coast Drive (halfway between the Pilot Pub and Romney Sands) (TR 085 208). The walk will last approximately 2.5 hours and is over shingle. It is a non-booking event and donations are appreciated. For more information contact the RMCP on 01797 367934 or email mail@rmcp.co.uk
Source: RMCP

Obviously people should confirm details with RMCP nearer the time. The walks are well worth doing!

Not directly related to sound mirrors (V2 rockets were supersonic), but sound mirror fans might be interested in London V2 Rocket Sites…Mapped at Londonist.

I’ve acquired a copy of the newly-published book Pillboxes of Britain & Ireland, by Mike Osbourne.

While it doesn’t cover sound mirrors, it is an excellent and comprehensive book on pillbox design and development, with typologies, plans, photographs and details of the theory and use of pillboxen. It is well worth any connoisseur of concrete defensive structures getting hold of a copy.

While we’re at it, I’ll also mention another good recent read, the new Osprey book on Armored Trains. I would review it, but this review says it all pretty well.

Unfortunately the book doesn’t mention the armoured train in Sarajevo.