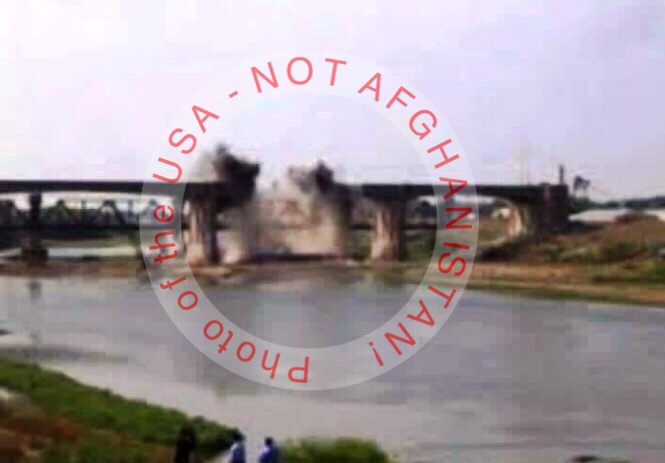 Various news reports say a road bridge in Afghanistan’s Kunduz province was attacked by the Taliban (or possibly a US air strike) on 21 August 2016.

Most of the news reports are illustrated with a picture or video of an explosion destroying a bridge. While not all reports explicitly claim that the photo shows the attack in question, some do make this claim. Claims that the picture is of the attack are also being made on social media.

However, a Google reverse image search find that the picture is actually a screenshot from around 1 min 15 sec into a video of the demolition of a section of the Topeka Boulevard bridge over the Kansas River on 9 August 2006, to make way for a replacement bridge; note the truss bridge in the background, and the people at the lower centre of the image.

Here is another view of the Kansas bridge demolition:

Some of the Afghan news reports give the impression that the bridge which has been attacked is the bridge opened in 2007 across the river which forms the border between Shir Khan Badar in Afghanistan and Nizhny Pyanj in Tajikistan: 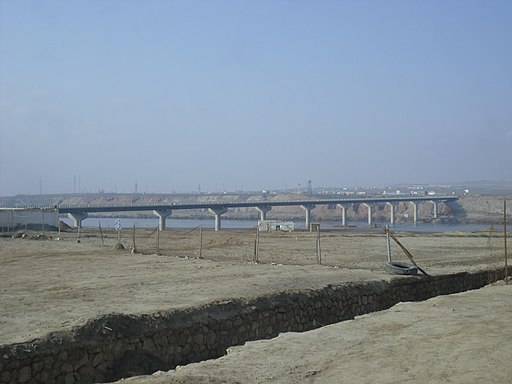 However, other reports specify that the bridge which was attacked was in fact the Alchin Bridge, or Pul e Alchin. According to Google Maps, Alchin is near the city of Kunduz, and has a bridge which is on the road north from Kunduz to Shir Khan Bandar and Tajikistan. This is not the bridge at the border, but it is on the route to the border, and it becomes possible to see how confusion has arisen. 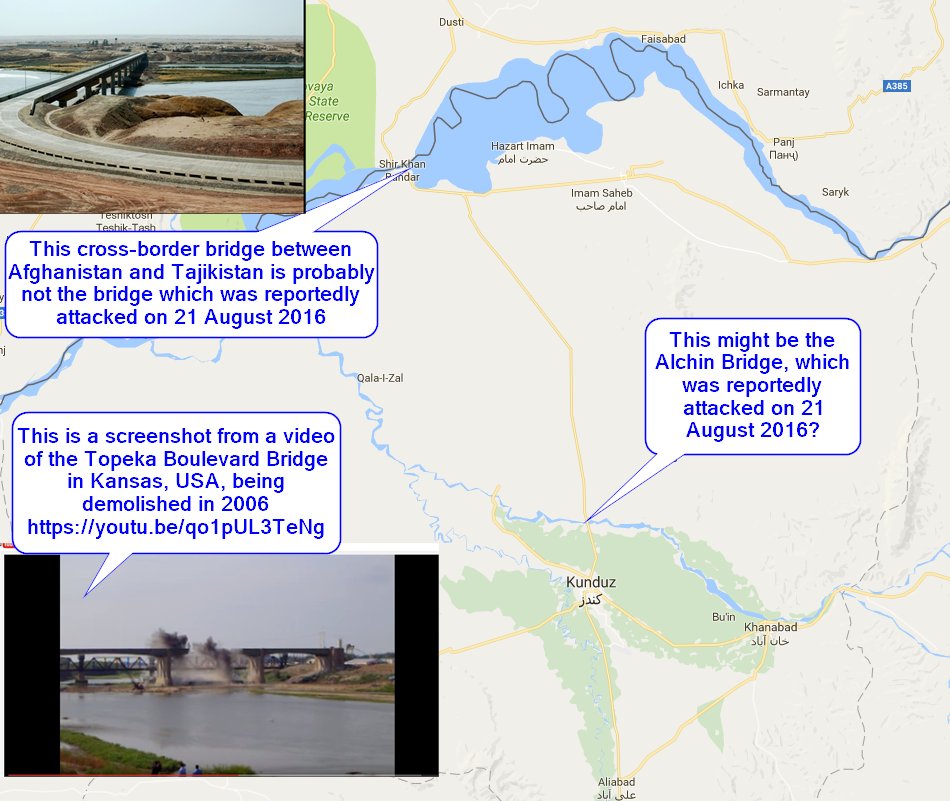 I have not managed to find a verifiable photo of the Alchin Bridge.

Appleton Consulting Incorporated (ACI) is proud to announce, in concert with its partner CANARAIL, the extension of the Scope of Work for the Afghanistan Railway Feasibility Study for Northern Afghanistan from 300kms to approximately 700kms. Awarded in December, 2013 to ACI and CANARAIL, the funding for this project is from the Asian Development Bank (ADB) and serves as part of a larger Central Asian regional transportation network that encompasses ten countries in the region and is intended to enhance large scale commercial market activity.

The Project will be implemented in two phases :

This is the first railway project to be managed by the Afghanistan Railway Authority (AFRA) established in 2012 for the development of more than 3000kms of railway in Afghanistan. The railway alignment is part of a major corridor in the country intended to serve the emerging mineral, oil and gas sector.

Their website has a basic map of the route.

“75km Railway to be Completed in Afghanistan”, reported TOLOnews on 2 August 2010. Work is “50 percent completed”, and there is a new opening date: “I hope the construction of this rail-road will be completed by the end of March, 2011,” said the Minister of Public Works, Abdul Qudoos Hamidi.

There is also this hint at something much bigger in the pipeline:

The ministry also adds that the Afghan government is planning to build 700km rail-road that will connect the capital Kabul with the northern province of Kunduz and the eastern city of Jalalabad.

The railway will be built by the MCC Chinese Company.

“The primary studies of this rail-road have already started, and its contract will be signed soon,” said Deputy Minister of Public Works, Ahmad Shah Wahid.

MCC is presumably China Metallurgical Group Corporation (rather than the other MCC). The Chinese group was selected for a concession to develop the Aynak copper deposits in 2007, with a railway proposed as part of the project.

The plan which seems to be firming up is to build a new north-south railway starting from Tajikistan. There would be a new line from the Tajik capital, Dushanbe, to the Tajik-Afghan border near Kunduz. The route would then run through Afghanistan from Kunduz to Kabul and the Aynak mining area, continuing on to Jalalabad. There would then be an onward link to the Pakistan Railways network, joining the line through the Khyber Pass to access to Pakistan’s coast.

Pakistan keeps talking about reinstating the out-of-action Khyber Pass line and extending it to Torkham (the Afghan border town) and possibly Jalalabad (the first major town in Afghanistan). However Pakistan Railways is reported to be facing serious financial and structural problems at present.

And as a correspondent points out, “railroads are built with money, not signed agreements to build railroads”.

The Secretary General’s statement
(Istanbul, 26th January, 2010)
[…]
In the field of transport and communication, the Secretariat is currently working on the launch of the ECO truck caravan to run from Turkey through Iran and Afghanistan to Central Asia. A wing of this truck caravan will run from Pakistan to Central Asia through Afghanistan. Such effort, if successful, will add value to Afghanistan’s competitiveness as a regional transit country with the estimated potential of 20 to 30 million tons of annual transit throughput to Central Asia, South Asia, Middle East and Europe. Similarly, in the field of railways, to enable Afghanistan’s effective exchange of goods and commodities with neighboring economies, the ECO is helping the country in connecting it to regional rail road system. Afghanistan’s railway lines are projected to run along the main regional transit routes stretching through Iran, Pakistan and Central Asia. Specifically, the rail segment en route Shirkhan-Bandar-Kondoz-Mezare Sharif-Herat is being considered for construction. It will connect Afghanistan’s rail system through that of Tajikistan with China’s railway network. A number of other projects/activities are also being worked out/planned for Afghanistan in the area of transport.
Source: Economic Cooperation Organization 2010-01-26

There was once a narrow-gauge railway in the Consolidated Cotton Company factory at Kunduz in northern Afghanistan.

I can’t find any information about Consolidated Cotton online, but according to USAID: In the 1960s, Kunduz was the home of the Spinzar Cotton Company, which helped to make it one of the wealthiest provinces in Afghanistan. Although the factory is no longer in operation, Kunduz maintains steadily improving infrastructure, with a plentiful water supply and high level of literacy.1

Spinzar which means white gold when translated into English, was formed in 1936 by a group of traders. It was sold to the state-owned Miley Bank of Afghanistan in 1944, ultimately passing to the controlled of the Ministry of Light Industry and Foodstuffs.2 Spinzar would appear to still exist, and it seems possible that it might be the same thing as, or a successor to, Consolidated Cotton.

The Consolidated Cotton Company of Kunduz, 63 per cent of whose stock was acquired by the Ministry of Finance in 1955, is gradually adjusting to provide a larger ginned cotton base for Afghanistan’s textile industry and for exports. In 1957, it replaced the old gins at Kunduz with eight new British models each having a capacity of 1500 pounds per hour and capable of extracting up to 37 per cent by weight of lint from long-staple cotton. It has also replaced or increased the number of gins in the outlying towns and plans to add several new ginning centers to its operations. But the most spectacular improvements are those being carried out in Kunduz itself, a rapidly growing city with a present population of perhaps 30,000, where the Company has employed Unimac of Austria to build new warehouse and operating facilities including equipment for making cooking oil, margarine and soap from cottonseed oil. The old operations of the plant have largely been modernized with the installation of air-suction and blower systems to carry the raw cotton from the storage sheds directly to the ginning plant and to feed the ginned cotton automatically to the cleaners and the hydraulic baling press. A narrow gauge railway then transports the bales to either of two warehouses with an 8000-bale capacity each.
Data on plant and operations from interviews with Messrs. Fox and Meyer, Austrian and German engineers, at the Cotton Company plant in Kunduz, September 25-26, 1957.

Source: The Kabul, Kunduz, and Helmand Valleys and the national economy of Afghanistan 3

DUSHANBE, February 2006, Avesta – Construction of railroad Kolkhozobod – Nizhniy Pyanj (Tajikistan) – Kunduz (Afghanistan) will cost over $100 million. The project was elaborated by Tajik specialists and adjusted with Afghan colleagues. The project provides for two stages of the construction. The investment project was submitted to all international financial institutes and countries-donors for consideration.

Efforts to boost the economies of both Tajikistan and Afghanistan moved one step further on Saturday, when Tajik President Emomali Rakhmonov and Afghan President Hamid Karzai laid the foundation stone for a US-funded bridge across the Pyanzh River.

“In the future we will lay electricity, gas and water lines through this bridge. We also hope that next to this bridge will be built another bridge designed for the Dushanbe-Kurghonteppa-Kunduz railway,” Radio Free Europe/Radio Liberty (RFE/RE) quoted Tajik President Rakhmonov as saying.