On 5 June, 2022, Akina-Andkhoy Railway Line Construction Resumed In Afghanistan. Engineers and railroad specialists from Turkmenistan arrived in the town of Akina to continue the construction of the Akina-Andkhoy railway line. pic.twitter.com/MRlvVgH7Sf

In accordance with the agreement signed earlier between the Turkmendemiryollary Agency and the Afghan Railway Organization, engineers and railroad specialists from Turkmenistan arrived on June 5, 2022, in the town of Akina to continue the construction of the Akina-Andkhoy railway line. Turkmen specialists also brought with them all the necessary machinery and equipment.

In the town of Akina, railway workers from Turkmenistan were received by the heads of the Organization of Railways and other departments of the Balkh province of Afghanistan.

As is known, the construction of this railway line with a length of 30 km began on July 25, 2019. However, for various reasons, including restrictions due to the spread of the pandemic, 29 kilometers 200 meters of railway were built. It is assumed that the remaining 800 meters of the railway track will be laid within one month.

Source: Ministry of Foreign Affairs of Turkmenistan, 6 or 7 June 2022

The Ministry of Foreign Affairs of Turkmenistan informs that the staff members of the diplomatic service and other state agencies of the country carry out regular contacts with the representatives of the “Taliban” movement on the issues of protection of state borders, provision of customs, sanitary, phytosanitary and other types of supervision and control implemented during the transportation of freights through the borders.

In this context, we note that the check-points on the Turkmen-Afghan border “Ymamnazar-Akina” and “Serhetabad-Torghundi” function in the regular mode and provide the passing of the necessary number of automobile trailers and railway wagons in accordance with the order agreed by both sides.

Press service of the MFA of Turkmenistan (undated, but between 15 and 18 August 2021) 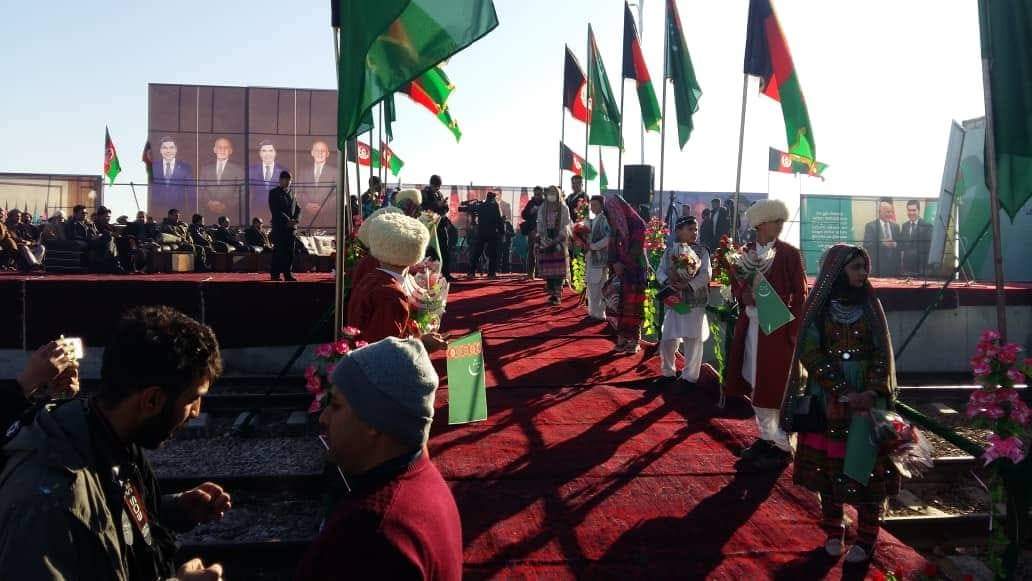 #Aqina railway port & railways between #Afghanistan & #Turkmenistan is ready to be inaugrated by high ranking officials of both countries in few days.
This is another big blow in strenghthening #trade #transit & #transport between central Asia & Afghanistan.#investinafghanistan pic.twitter.com/ozNvE0CkHM

Construction of the 30 km railway extension to Andkhoy from Aqina on Afghanistan’s border with Turkmenistan.

President of Afghanistan Mohammad Ashraf Ghani made an official visit to Turkmenistan at the invitation of President Gurbanguly Berdimuhamedov on 21 February 2019.

As part of the visit, an MoU was signed for Turkmenistan to build the 30 km railway extension from Aqina, on the border, to Andkhoy, the first significant place inside Afghanistan.1 Agreements were also reached for the regulation of cross-border rail traffic, while the possibility of building a Towraghondi to Herat railway is to be studied.

Dwelling on the key areas of economic cooperation, the heads of state specifically focused on the transport and communications sphere. […] The Presidents highly commended the finalization of works and commissioning of the Serhetabat–Torghundi and Kerki–Imamnazar railway networks, and the Rabat–Kashan–Kalai-nau power line.2

[Ghani] noted the presence of big opportunities in different directions of cooperation including in railway transport and communication, having expressed the confidence that Afghan part would also take part in the construction of the railroads of international importance.

In this context, President Mohammad Ashraf Ghani highlighted the importance of the initiative about the continuation of Serhetabat – Turgundy railroad to Herat, having assured that Afghan side would make relative work for the implementation of this project.
[…]
Speaking about the partnership in railway sphere, President Mohammad Ashraf Ghani noted the future of continuation of construction of Kerky – Ymamnazar – Akina railroad as well as continuation of Serhetabat – Turgundy railroad to Herat.3

Afghanistan Railway Authority (ARA) and Ministry of Transpiration and Communication of Turkmenistan, in the presence of presidents of Afghanistan and Turkmenistan, singed Memorandum of Understanding (MoU) for construction of railway from Aaqina port to Andkhoy district. This project will be designed and constructed with the length of 30 km from Aaqina railway’s station to Andkhoy railway’s station by technical facilities and professional experts of Turkmenistan’s railway.

It is worth mention that based on the pre-signed contract between the railway authorities of both countries, construction of 10 km new railway for development of Aaqina railway’s station is in progress. Also during the official trip of the president of Afghanistan and containment delegation to Turkmenistan, two other agreements signed between railway authorities of both countries for administration and organizing of Tor Ghondai port railway’s affairs. The parties as well agreed to jointly assess extension possibility of railway from Sarhadabad-Tor Ghondi to Herat city.4

The lines in question are 1520 mm gauge, as with the route from Uzbekistan to Afghanistan.

An “Agreement on International Railway Transit Point on Turkmen – Afghan State border” was signed “on the government level”, and regulations for the organisation of railway communications between Serhetabat and Turgundy [Towraghondi, etc] adopted.5

The celebrations of the opening of the second railway from Turkmenistan to Afghanistan on 28 November 2016 have won an award at the AV Awards event.

The winning project is a truly impressive high-tech show, organized for those who attended the opening of the Atamyrat-Imamnazar-Aqina Railway, the first phase of the Turkmenistan-Afghanistan-Tajikistan railway project.

A large octagon-shaped presentation tent (with a sitting capacity of 1,000) had specially been erected for the event at the border of Turkmenistan and Afghanistan. The tent housed display surfaces, shaped like traditional Turkmen ornamental patterns, onto which images were projected using video mapping, the projection technology that enables to create 3D images on real-world objects, while adjusting their shape. A kinetic installation on the ceiling with 500 rotating and shimmering globe-shaped lights and colorful three-dimensional projections on the floor created an immersive environment.

The two-minute show featured dynamic video images that came into sight like abstract sculptures and projected onto the walls, floor and ceiling. Suddenly there appeared a drop of water, then a carpet seemed to be woven from the light, after that ornaments of Turkmen carpets emerged, and finally all the images turned into a railway disappearing into distance.

Christie partner Tribar Imagineering Ltd picked up the Live Event of the Year award for its Turkmenistan – Afghanistan railway link inauguration event. The stunning project used 16 Christie Boxer 4K30 projectors to create a powerful projection mapping narrative.​
[…]
The Turkmenistan – Afghanistan railway link inauguration event, carried out by Tribar Imagineering Ltd, marked the inauguration of the first part of a new railway connecting Turkmenistan and Afghanistan for the first time [actually the second time – there is the line to Torghundi]. Presidents of both countries attended this event which marked a development of huge economic importance for the region. The high brightness of the Christie Boxer 4K30 – along with its compact, lightweight and rugged design for easy transport – made it the perfect projector for Tribar’s needs in the spectacular event which pioneered AV technologies to a potential new market in central Asia.​​
Source: Christie Celebrates AV Awards Success, Christie Digital Systems, 30 October 2017.