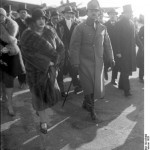 22.2.1928: Afghanischer König in Berlin is a German-language article from Deutsche Welle about King Amanullah’s visit to Berlin during his 1928 European tour.

In the 1920s a number of German engineers, doctors and other experts were Afghanistan to assist with modernisation and development.

King Amanullah’s visit was particularly significant for Germany, because it was the first state visit to the country since its defeat in World War I.

Afghanistan had remained neutral in the Great War, which was useful for Britain as this meant that some of the troops who would otherwise have been needed to defend the Northwest Frontier were available for deployment elsewhere. However the Third Afghan War took place in 1919.

While in Berlin the King drove a type A-II U-Bahn train, which led to the class being known as the Amanullah-Wagen.

Does anyone know where he drove the train – someone must have made a note of which stations he visited?